At some point in your life, there will come a time when you will be presented with a leak or some other plumbing catastrophe due to your bath taps.

You will then be left wondering how to change a bathtub faucet.

Don’t worry though, it’s not as daunting as it sounds!

This step-by-step guide will take you through the process of demonstrating how to replace a bathtub faucet.

How to Remove a Bathtub Faucet

Step 1 – Cut off the Valves

Removing and replacing a good-quality bathtub faucet is a simple enough task. To keep it that way, turn off the water supply around the home.

This will in turn shut off all the circulating water so that you will not cause a big, big mess.

It is recommended that you also drain any excess water before continuing to the next step.

In most cases, this screw will be located underneath the spout of the tub faucet. In order for you to detach the spout you will need the proper screw.

In most cases, this screw is an Allen screw, and an Allen key will be needed.

There is also a chance that the spout does not have a screw and it will just be a simple twist-off spout, in this instance just twist the spout in a clockwise direction, and then it will loosen.

Once done, remove the faucet.

An escutcheon is fastened on by way of screws most commonly.

In some cases, caulking is used instead.

If it is fastened on by way of screws, all you need to do is grab a flathead or star, depending on the screw, and twist it out. Pretty standard stuff.

If it is attached to caulking, put your cutting skills to the test and carefully cut through the caulk layer, and then lift it.

I suggest you use a plastic cutter so as not to risk scratching anything. Once completed, you should see the cartridge.

Step 4 – Pulling Away the Cartridge

Pulling the cartridge away. Have a pair of pliers ready for the following step.

To get the cartridge free, use the pliers on the retaining nut. Unscrew it and give it a tug. There is a little brass screw atop the cartridge.

Keep it safe in case you need it when fitting the new cartridge if the new one is lacking. It helps mark the side of the cartridge that should be facing up.

You need to install the replacement in the same position and face the same way as the previous one.

How to Replace a Bathtub Faucet

By this stage, you should have taken note of how what type of cartridge you previously had and by this time bought a new cartridge that is identical to that of the previous one.

When buying a new cartridge, it typically includes washers for the cartridge.

It is suggested that you also get some plumber’s grease or silicone grease for the washers.

Your job of inserting the cartridge will be a lot easier with a bit of grease.

Start off by popping in the aforementioned screw if the replacement cartridge did not feature one already.

Now grease up the washers a tad. Once done, you can put the replacement in. Be sure it faces the same way as the previous one! 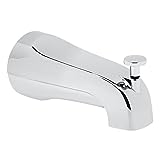 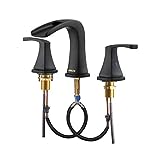 Mounting the escutcheon plate is not a difficult task at all, to say the least, but it is a task that you want to do correctly.

Start making sure that that wall area, whether it be tile or any other type of material is thoroughly cleaned and dry before starting this step.

Apply plumbers putty to the back of the escutcheon plate.

Put the plate back onto the shower arm and slide the plate up against the wall and press firmly.

Hold the plate against the wall for approximately one or two minutes, applying firm and even pressure.

Wipe away any excess putty that may be left over from this process.

Start off by placing the faucet spout on the countertop.

If the tub spout has preinstalled riser tubes, match them up with the openings in the counter/sink and lower the spout into place.

The next action of this step would be to place the bath faucet valve handles (hot and cold) in the holes/openings in the countertop.

From the under counter connect the hoses from the hot and cold valves with the spout.

Change out the old Teflon tape with new tape around the shower arm, wrapping it tightly to avoid any slow drips.

To conclude, replacing a bathtub faucet is not a difficult task.

If you understand the type of bathtub faucet you have,  you don’t need to call in a plumber or sit with the leaky faucet, flood, or stain the problem is causing.

But it is a task that needs to be done with care in order to sustain its longevity and see to it that the next replacement will come in the very distant future!

Hi, I’m Callum, a full time plumber with a plumbing license issued by my state. So far, I’ve spent nearly a decade and a half installing and fixing a wide variety of plumbing components and units. My profession inspires me to talk about the kitchen and bathroom (and the plumbing system) so confidently and knowledgeably that I offer my free consultations to help neighbors and fellow homeowners every now and then. As I enjoy installing faucets, sinks, showers, and fixtures, I love to see people enjoying services from those components for years to come. So, I write every week to inform you and others. Will you mind going through some of my articles on this website?