So you walked into your kitchen, ready to cook up a storm, and it hit you – that awful smell hanging about. You scrubbed everything down, twice. You emptied the trash can. You mopped the floors. You even cleaned out your fridge. But some how that smelly and offensive odor was still there. You eventually realize it’s your kitchen sink! You wonder to yourself how a simple sink could cause so much trauma to your nostrils, and you’re also wondering how to get rid of your sink smell, fast! Well, fear not! You’ve come to the right place. Let’s discuss some effective tips and tricks to remedy the problem, and get your kitchen smelling fresh again in no time!

Why Your Kitchen Sink Smells

The large majority of us try our best to keep our kitchens clean, whether we own an undermount sink or a double bowl sink. But we often forget about the drain pipes and traps in our kitchen sinks. Grease, grime, rotten food, and other little nasty build-ups in our sink drain and trap over time. This build up is most often what causes that awful smell in and under our drain units.

14 Tricks on How to Get Rid of Your Sink Smell

Pour a pot of boiling water down the drain to lift and move the muck that’s clinging to your sink drain walls. This is especially helpful if you have a garbage disposal in operation and is the simplest trick on how to get rid of kitchen sink odor.

When the boiling water alone is not quite enough, add some dish soap to it and throw it all down.

If the preceding tricks failed to remedy the problem, and you have a garbage disposal installed, throw down some crushed lemon peels, ice cubes, and coarse salt. This seemingly strange concoction is a triple threat that will remove food particles, dissolve grime, and leave the disposal smelling fresh!

4. Frozen Cubes of Vinegar and Lemon

Sounds strange right? Well it works wonders! Cut out some lemon wedges, pop them in a muffin cup or tray, pour some good old white vinegar into the cups, and let this freeze. Once frozen solid, throw this down your disposal, turn on the tap just slightly, and turn the disposal on. Simple, effective and probably the most creative answer on how to get rid of bad kitchen sink smell.

For those who do not have garbage disposals and need a super effective trick, try putting a cup of baking soda in your sink drain, directly followed by two cups of vinegar to mix and react with it. Give that a few minutes to react and do its job. Then pour some boiling water from the kettle down to wash the now loose muck away. This is pretty much the go-to for most kitchen cleaners in the know about how to get rid of your sink smell.

There is little difference between the previous trick and this one, except that lemon juice leaves your sink and kitchen smelling far more fresh and clean. It can be a bit more costly, but for those who value a bright smelling kitchen, this one’s for you! Remember, you can also use these items when removing rust from the sink. 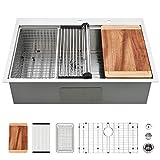 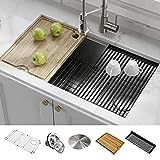 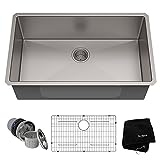 If you’re somewhat of a fanatic about ensuring your kitchen smells better than just clean then this is the trick for you! Throw down some baking soda, a cup or more. Follow that up with just a bit of essential oil extract such as mint or eucalyptus, and leave it for a few hours. After a few hours, pour down some boiling water. You will thank me later, trust me! Because for those with a sensitive nose and a strong preference for fresh natural smells, this one is going to be your favorite smelly kitchen sink drain remedy, for sure.

Vinegar is a very reactive and corrosive liquid that has little trouble removing that odor-causing grime, grease and food particles. You can throw in some baking soda for good measure too if you’d like. Another simple and affordable trick on how to get rid of kitchen sink smell.

One can always refer to the corrosive cleaning power of simple distilled white vinegar, or couple it with baking soda. Keep in mind however, that the smell produced by the vinegar is not nearly as pleasant as some of the other methods mentioned.

Borax is well known, widely used, and well proven. It’s easy to acquire and will eat away pretty much any ugly build up in your drain and sink trap. It won’t leave a particularly pleasant smell but it’s a pro at removing what causes odors.

This is one for those who have garbage disposals. Cut up some lemon, orange, or lime peels into small pieces and throw it down the sink drain. While the garbage disposal is running, ensure you run cold water so the motor doesn’t need to work too hard. Then when off you can flush with a round of hot or even boiling water. This cleans the disposal up nicely and leaves it smelling all kinds of fresh!

This trick is effective for garbage disposal owners. The ice helps to smash food particles off the blades and the salt helps dissolve everything else. Many can testify to the effectiveness of this method.

The name speaks for itself! Bio-enzymes can be used to literally eat away all that gunk that’s making your sink so smelly. They are not what I’d call cheap, but they are the A-team in dealing with sink odor problems. The good news is you can make enzyme cleaners at home anytime you want.

Another go to for many people is a simple solution of salt in boiling water. Boil a kettle of water, throw in a cup or so of salt, give it a chance to dissolve, and pour it down the sink drain. Sodium can be quite corrosive and effective in dealing with grime and grease.

I should also mention that all these tips are likely to solve your concerns of how to get rid of bad smell under kitchen sink because for the most part, that undersink smell is from the muck in the pipes anyway, not a separate problem at all! Two birds one stone right?

It’s worth mentioning that the only other remotely common cause for a smelly sink drain is sewer gas. The smell is quite obviously different to that of grime or food build-up, but can most often be remedied the exact same way. Simply track the drain that the sewer smell is coming from, and try the baking soda, vinegar and boiling water trick. If this is completely ineffective it might be worth calling in a plumber to check for possible leaks.

How Do I Make Sure This Odor Problem Never Returns?

For Those With Garbage Disposals

Try to ensure you run your disposal until the very last scrap has been devoured and dealt with when disposing of anything. Try to eliminate the use of hot water while running the disposal because it can force the engine to work harder and less effectively. Every now and then, flush your disposal with soapy water. Once it’s been rinsed out follow that up with some hot water. You should also try to avoid disposing of extremely greasy or fatty substances through the disposal as this leads to quick build up. If you follow these steps you should effectively be preventing build-up, and thus preventing the smelly problem from returning!

For Those Without a Garbage Disposal

Always try to avoid sending large chunks of food down the drain that could clog the sink. In addition, avoid pouring fats and grease down the sink drain too. Just following those two steps gets you halfway there already. Consider flushing and rinsing your drain with salt or vinegar or even baking powder on a weekly, or by-weekly basis.

Employing one or more of the 14 tricks mentioned above will surely rid you of that smelly odour from in and under your kitchen sink. Following these preventative measures will ensure it never ever comes back. And thus you can rest assured you will never walk into your kitchen again asking yourself “why does my kitchen sink smell?”

Hello, I’m Jenny. I’ve been an interior design artist by profession since my B.S. in Interior Design. I’m a minimalist and prefer to save space when choosing fixtures, sinks and fittings. My style tends to make the most out of the least amount of space. The idea behind every interior design project is unique and it reflects personal style, taste and tradition. I’ve learned more when working than I ever did while I was studying in college. I worked in more than 12 hundred households all across the US and got positive feedback. I’ve been working with FaucetsReviewed as one of the founding members and regularly contributing to the site via testing and reviewing various interior fittings and fixtures.