Hard water is the cause of many problems. For example, it can damage your pipes and water heaters over time.

In addition, limescale on water adheres to the surface, creating ugly stains. In addition, hard water ruins the healthy appearance of your skin and hair.

Calcium and magnesium are the main causes of hardness in water. Through a simple chemical reaction, it’s possible to remove a high concentration of these minerals. Water softeners do their job following that same principle.

Today, we’ll explain how does a water softener work. In addition, we’ll show you in detail each of the elements that make up a soft water system. Let’s get started.

Then, the sodium ions positively charge the polystyrene spheres, restoring their ability to remove hardness from water.

Also, salt water helps to remove the sodium and magnesium blocks attached to the spheres. From time to time, the user should add more salt and water to the brine tank.

Usually, salt used on brine tanks comes in the form of blocks or pellets.

The control valve determines the water volume entering and leaving the mineral tank. After several uses, the polystyrene spheres lose their ability to remove water hardness.

The start of the regeneration cycle is conditioned by some factors, such as:

Inside the mineral tank, calcium and magnesium are removed from the water. The water enters the tank and passes through small polystyrene spheres.

Each of these spheres is positively charged with a sodium ion. On the other hand, calcium and magnesium are negatively charged.

As with magnets, positive and negative charges attract each other. So, sodium and magnesium particles tend to adhere to polystyrene spheres. After this happens, sodium ions mix with softened water.

Types of the regeneration process

In a co-current cycle, the salt water enters the mineral tank in the direction of service flow. The salty solution releases calcium and magnesium particles from the polystyrene spheres.

Also, in a co-current cycle, the highest charged spheres accumulate at the top of the tank. This process demands a higher quantity of salt and water compared to a counter-current cycle.

In this process, saltwater enters from the bottom of the mineral tank. So, the salty solution first makes contact with the less depleted spheres.

A counter-current cycle consumes 65% less water and 75% less salt than a co-current cycle. In addition, sodium ions are evenly distributed in the solution.

In this case, the highest charged spheres accumulate at the bottom of the mineral tank. 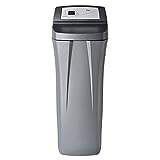 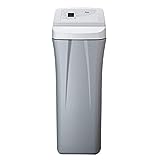 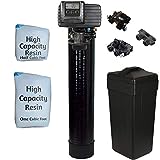 As said before, hard water is the cause of many problems. For example, the buildup of limescale can cause pipe blockages.

Inside water heaters, the damage is much worse. In hot water, limescale tends to form huge stones. Over time, these stones tend to collide with the heater walls and cause unpleasant noises.

So, hard water can cause you serious financial problems in the future. You’ll end up spending hundreds of dollars on repair work.

But this situation could be much worse because hard water can also affect your health.

Soap doesn’t dissolve properly on hard water, reducing the production of suds. When this happens, the moisturizing ingredients in the soap don’t penetrate the skin and hair.

As a result, the skin and hair become dry and lose their natural shine. In addition, people who drink hard water have a higher probability of suffering from kidney stones.

These are just some of the problems that hard water can cause. For this reason, it’s so important to install water softeners at home.

These devices differ from the filters because they don’t purify the water. Water softeners are totally safe and don’t pollute the environment.

In addition, they’re very durable and can withstand up to 20 years of uninterrupted use.

In addition, these devices require monthly maintenance that includes cleaning and adding salt to the brine tank. Associated costs can exceed $25 per month.

However, not having a water softener would imply a much higher waste of money. For that reason, installing these devices at home is the smartest way to save.

Certainly, having a water softener at home is a great advantage. These devices considerably improve water quality. So, your hair and skin will look healthier after each shower.

In addition, they’re very easy to install and can last a lifetime with proper use.

For these and many other reasons, buying a new water softener is an excellent idea.

Q. 1: How to know a water softener is properly working?

Ans. If you note your hair and skin are too dry after taking a shower, maybe the water softener isn’t properly working. The best way to verify this is to check the salt level in the brine tank.

If after several uses, the salt level remains high, the water softener has stopped working.

Q. 2: Is it safe to drink softened water?

As a trained chemist and an independent researcher I started working on a portable water filter project as part of my business plan. While carrying out my research, I got involved with FaucetsReviewed. My fields of expertise include environmental science, biochemistry and water purification chemistry. Apart from contributing to this website, I’m currently working on my book “Water Filtration Science”. It will be published soon. I grew up in California, and completed my postgraduate degree from the University of California-Berkeley. I also work as a private counselor on the household water management system.