Exhaust fans are an essential part of a house’s ventilation equipment and serve a vital role in maintaining a healthy environment. They eliminate humidity from bathrooms upon showering, as well as stale and odorous air. Exhaust fans are usually mounted on the rooftops of bathrooms, although they may also be mounted directly on the wall. If the mirror steams up after a bath or shower, or if there is an accumulation of condensation on the walls, it is time to know how bathroom exhaust fans work.

Most people believe that the major purpose of a bathroom exhaust fan is to remove odors, but the most important role is to remove warm, humid air caused by bathing or showering. Humid air not only stimulates mold development but may also harm the fixtures and surfaces. Hot air created by circulating hot water in bathrooms is ideal for the growth of mildew, mold, and microorganisms. High levels of moisture in bathrooms can deteriorate interior room components including wallboard, paint, and trim, as well as the entrance door. If your bathroom does not have an exhaust fan and smells damp, you should install one as soon as possible, and check to see if severe mold infestation hasn’t already started.

Exhaust fans draw air from your bathroom and vents it via a duct to the outside. The exhaust duct is normally composed of elastic aluminum and usually has a diameter of 3-6 inches. The bathroom duct could be just 1-2 feet long, but other ducts might be over 25 feet long.

If your bathroom duct runs through a basement, attic, or crawl area it is usually necessary to insulate it. Condensation and water particles can accumulate on the duct due to the temperature differential between the exhaust duct airflow and the uninsulated area. That condensation can cause wood deterioration and even mold development.

The strength of exhaust fans is measured in CFMs (cubic feet per minute). The CFM value refers to how quickly your bathroom exhaust fan can remove air in your bathroom every minute. Bathroom fans with the lowest CFM ratings have a value of 50 CFM, while residential exhaust fans may reach up to 180 CFM. Anything beyond 180 CFM is generally designated for commercial establishments. The typical rule for bathrooms with 100 square feet or fewer is 1 CFM per square foot, with at least 50 CFM.

The most popular way to regulate a bathroom exhaust fan is with a conventional wall switch. When you’re having a shower, you click the switch on, and when you’re done, you click it off. However, when you have a shower, you should turn on the exhaust fan for 20 to 30 minutes to ensure that all of the humidity is removed. 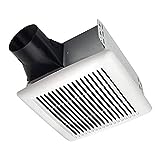 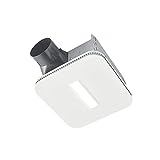 The Advantages of Installing an Exhaust Fan

One of the most notable advantages of having an exhaust fan is that it contributes to the removal of mold problems that you may be facing. Mold is almost a certainty when humidity is allowed to accumulate over time, even in a place designed for dampness like a bathroom, especially under surfaces and inside walls. Exhaust fans will prevent that from occurring in the first place by eliminating humidity from the air before it can accumulate. Another significant advantage of having an exhaust fan is the elimination of odors. Even the worst scents in a bathroom can be removed in minutes by turning on your exhaust fan.

1. Is It Necessary to Vent Exhaust Fans Outside?

Although it may seem appealing to vent an exhaust fan into the ceiling, this approach has numerous drawbacks. One of the most significant is that it adds excessive moisture into an area that is supposed to be dry. As a result, many locations have building regulations that demand bathroom exhaust fans to be vented outside.

2. Is it Bad to Have an Exhaust Fan That Is Too Big?

Hi, I’m Callum, a full time plumber with a plumbing license issued by my state. So far, I’ve spent nearly a decade and a half installing and fixing a wide variety of plumbing components and units. My profession inspires me to talk about the kitchen and bathroom (and the plumbing system) so confidently and knowledgeably that I offer my free consultations to help neighbors and fellow homeowners every now and then. As I enjoy installing faucets, sinks, showers, and fixtures, I love to see people enjoying services from those components for years to come. So, I write every week to inform you and others. Will you mind going through some of my articles on this website?